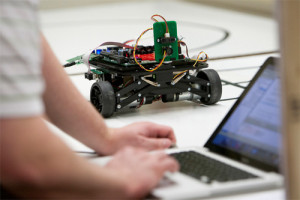 Most careers in robotics require an engineering degree, and to use computer science degree in robotics requires a special career trajectory as well as the right elective undergraduate courses. Some colleges offer undergraduate programs specifically designed for robotics and artificial intelligence, and students in these programs gain extensive knowledge about physics, graphics programming, discrete mathematics, linear algebra and visual processing.

While the knowledge of sequential algorithms taught in a computer science program can be useful in robotics, like all specializations, this field requires a particular set of skills that isn’t taught to all students. According to NASA, most of the robotics engineers at NASA have bachelor’s and master’s degrees in one or more fields of engineering, and most undergraduate computer science programs don’t cover the advanced physics and engineering concepts used in robotics.

There is a need for computer scientists to use their knowledge of software programming to design programs that control the behavior of robots, and careers in this field require advanced science, mathematics and artificial intelligence knowledge. To get a job in robotics, it’s usually necessary to have a master’s degree, because a bachelor’s degree doesn’t go into enough depth to prepare students to design AI software.

Depending on the company hiring robotics engineers, however, a four-year degree in computer science with a specialization in robotics or artificial intelligence may be sufficient. For example, companies hiring engineers to design consumer products that use AI and robotics may not want to pay engineers with master’s degrees to undertake such a relatively simple task. If you want to get an idea of what the job market is like for robotics engineers, you might consider enrolling in a university that offers a robotics-track four-year computer science degree and then applying for a few jobs that only require a bachelor’s degree. You can then enroll in a master’s program for your area of research while working in industry.

Jobs in the Robotics Industry

Robotics is a varied industry and doesn’t have just one career trajectory, according to the Institute of Electrical and Electronic Engineers . The growth in this industry is steady, although it’s not expanding quite as fast as some other technology-related industries. Robotics jobs are concentrated in three main areas: consumer products, manufacturing and military defense. Most of the jobs in this market are located in the United States due to the high demand for military robots and the relatively large demand for consumer robots.

Other big job markets are in Germany and Japan, where most of the manufacturing robots are designed and built. Many robotics experts end up working for software companies such as Microsoft, and there is also a high demand for these people in toy industries, computer graphics and vision programming.