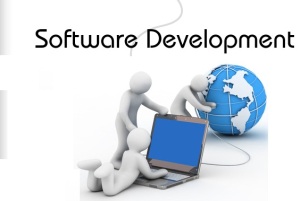 Software developers often have a chance to get involved in every aspect of creating their products. Some developers work with programmers, also called coders, to write the actual programs, but they may have to write the program – in whole or in part – by themselves.

Out of all the computer science jobs available in software development, working on applications is probably the most popular goal among college students and recent graduates. These employees work on projects such as word processors, productivity apps and games. Like most computer-related jobs, you should expect to work at least full-time if you get into this type of work, and don’t be surprised if you’re asked to work overtime at least occasionally. Well-known employers of application software developers include companies such as Google and Microsoft, but a lot of application software developers work for small start-up companies that are more obscure. The average annual salary of a software developer who works with applications is around $90,000. Much of your workday will be spent working solo or within small groups, but you’ll also collaborate with larger teams on many projects.

Computer science is a great industry to work in. There are many computer science jobs available in software development, and getting one of these jobs will ensure that you’ll be able to have an enjoyable and high-paying career.