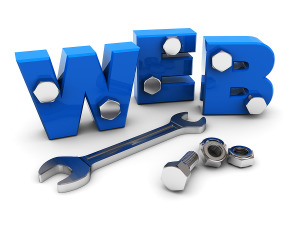 Web development jobs are broken down into the different components that make up a website or Web application. Employers are hiring PHP, Django and Ruby developers as well as site template designers and database administrators. Website templates consist of the HTML, CSS and JavaScript code that gives a website its style and appearance. For example, WordPress and Tumblr theme designers perform work similar to site template design.

Bridging the Gap Between Web and Mobile Platforms

The main reason Web development jobs are increasing so rapidly is that employers need programmers to make their websites accessible to mobile device users. The demand for smartphone and tablet apps is growing very quickly, and many businesses need Web apps for these platforms. The frameworks and software design patterns for Web and mobile platforms are quite similar; both platforms use the model-controller-view (MVC) pattern to handle data stored in a database and embed event listeners in a program template. When you understand MVC programming, you can do most Web and mobile programming jobs.

If you want to specialize in a particular area, the most versatile and in-demand area is template design. By learning HTML5, CSS3 and JavaScript, you not only prepare yourself to design sophisticated, modern websites with animations, transitions and dynamic page routines, you also have the ability to use cross-platform mobile frameworks such as PhoneGap and Cordova. Instead of using a mobile platform’s native code, such as Java for Android or Objective C for iOS, you can design mobile apps for all platforms simultaneously using HTML, CSS and JavaScript.

The advantage to working in Web development is that you don’t have to finish a four-year degree; you can enroll in a two-year degree that focuses on the skills needed for Web development. A computer science degree covers a lot of abstruse theory that isn’t relevant to a Web programmer, such as formal language theory and the problem of P versus NP. There are not very many difficult technical problems to solve in Web development; the work is mostly determined by the framework being used.