“On the Internet, no one knows you’re a toaster.” That might be what people say when the Internet of Things (IoT) — aka, Internet of Everything (IoE) — has widespread use, instead of just the 10 billion “things” that are currently connected online. When that time comes, anything and everything could be connected.

While only a fraction of connected things fall into the familiar categories of web servers, home Wi-Fi routers, smart phones, tablets game consoles, camera, there are a growing number of such things, including sensors for home automation. We have a look at the numbers surrounding the IoT.

The Internet of Things: By the Numbers

Overview: What is the IoT and How it Works

As suggested by numerous reports and white papers by both big players and analysts, the market potential for IoT/ IoE is in the trillions of dollars globally per year and growing. If you want to read in more depth about market forecasts, visit http://postscapes.com/internet-of-things-market-size/.

In Jan 2014, Google announced they were purchasing Nest, a maker of home automation sensor devices — in this case, a smart thermostat and smoke detector, both of which can be controlled by an Apple iOS mobile app.

A number of telecoms and cable companies, including AT&T and Comcast/ Xfinity are working on their own home automation systems. Apple was apparently not in the picture of companies looking to purchase Nest, despite the key Nest executives being former employees.

For Apple, there’s possibly more opportunity in the connected-marketing space, using their iBeacon geofencing technology, which is being rolled out to at least 100 American Eagle Outfitters retail stores in the USA as of Jan 2014. Apple started rolling out iBeacon use to 254 U.S. Apple stores in Dec 2013.

Where there’s a way, there’s a will? IoT devices have already been used for cyber attacks, to send spam over email. Proofpoint.com published a report in Jan 2014 about a series of cyber attacks.

Homing devices for animals are nothing new, but the technologies now being used are smaller, more efficient, and have new abilities, including creating a connected network. Current uses of wireless sensors include cows and bees. Not robotic insects but actual honeybees with attached sensors, these two creatures to the potential “thing” list of the Internet of Things. 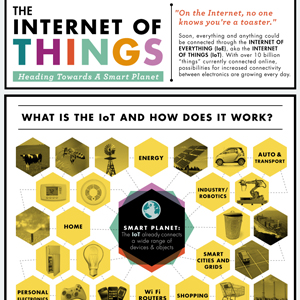