Prospective students may also want to consider our ranking of best online schools for computer science and IT.

Almost everyone interested in computer science knows the top schools. Stanford, MIT, and Harvard are all obviously among the usual suspects. These schools, however, are famously difficult to get into. So what happens if you aren’t among the 8% of students that can get into one of these schools? What if you can’t afford some of the other outstanding but expensive programs at other schools? That’s where this list comes in.

We’ve identified five key points of comparison that will enable prospective students to see differences and similarities between what are the top schools, and what are the accessible, affordable, but still high quality options. The five data points are Acceptance Rate, Graduation Rate, Recognition, Tuition, and Return on Investment. The schools are listed in order of least to greatest return on investment, because this will allow students to see what they can expect in terms of the economic value of their education. For information about sources, see the note at the end of this article. 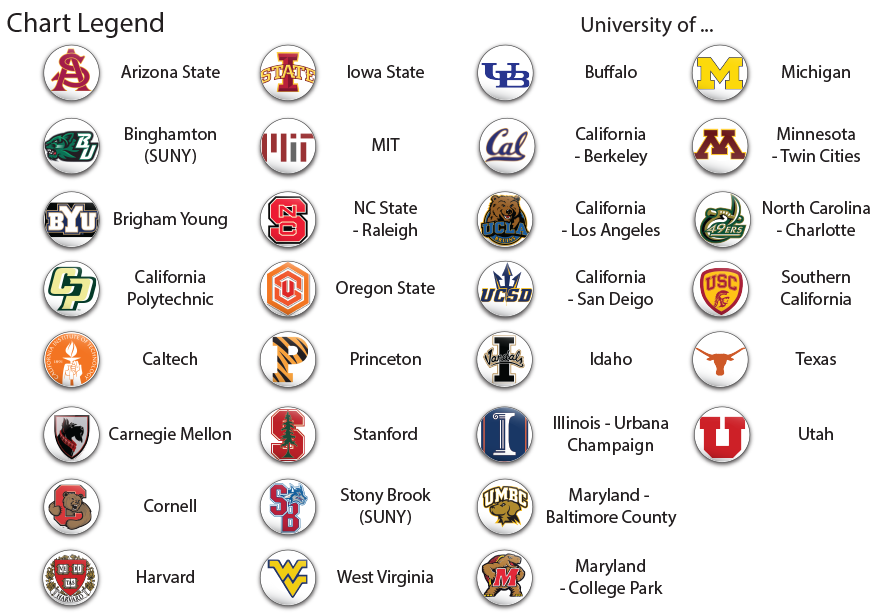 The points of comparison chosen for this list reveal some interesting things. There seems in many cases to be an inverse relationship between acceptance rate and graduation rate. The higher the acceptance rate, the lower the graduation rate. While there are exceptions to this, and the disparity between the two statistics varies from school to school, one thing this might indicate is that while schools may be more accessible, this does not mean that the programs are necessarily easier. This is good news for students seeking a rigorous, thorough, high quality education. 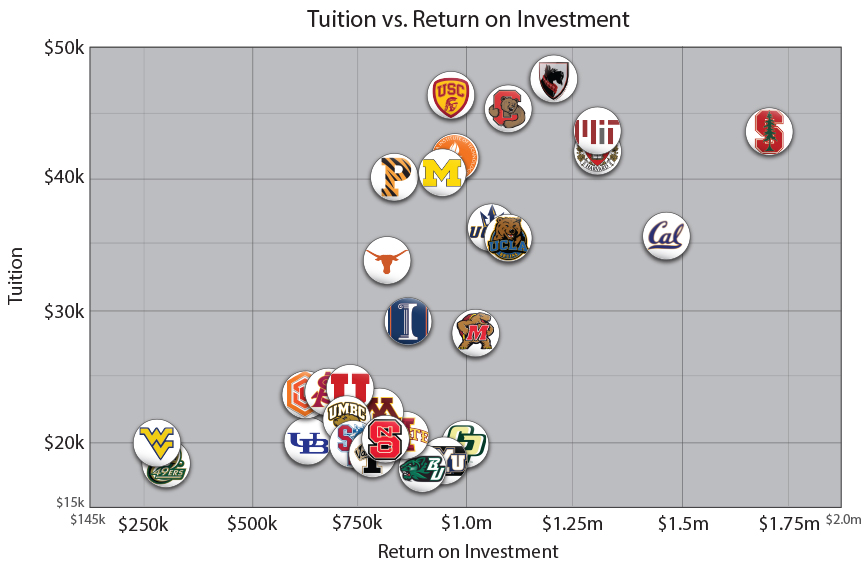 Another interesting thing one might note is that there seems to be diminishing returns when one considers that in most cases, going to a reputable school at half the cost of a top school, does not necessarily mean half the earning potential.

This list isn’t here to tell you to go to one school over another. It’s merely intended to give you the data required for you to make an informed decision about your computer science education, and to show you the quality options out there that not as many people are talking about. 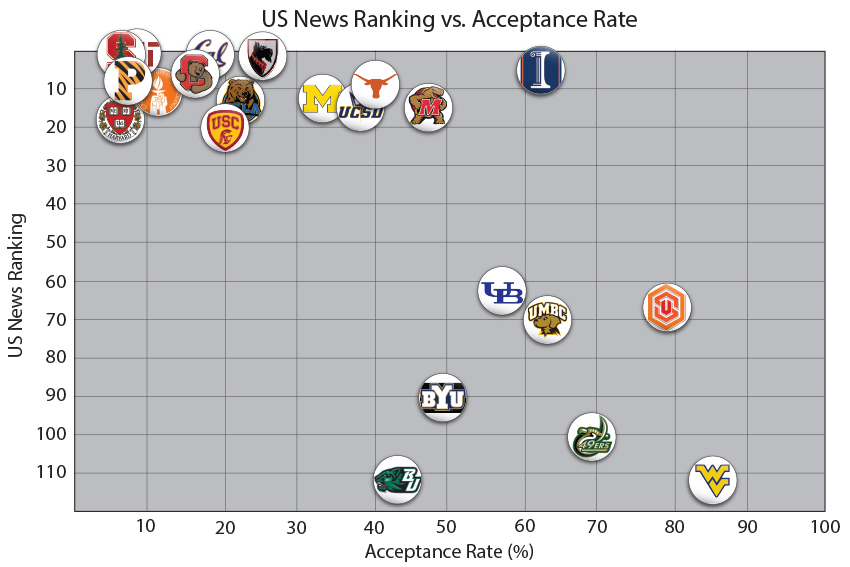 #14. University of North Carolina at Charlotte: B.S. or B.A. in Computer Science

The CS department at UNC Charlotte is focused on providing a strong program for students interested in any of the three major roles played by computer scientists. These three general roles are: the design and implementation of software, discovering new ways to use computers in a variety of areas, and applying their knowledge to known issues in computing and solving those problems.

#13. University at Buffalo: B.A. or B.S. in Computer Science

SUNY Buffalo offers students a wide range of choices, including a couple different five years combined bachelor’s and master’s programs. These include a B.A. in CompSci/MBA program, and a B.S./M.S. in Computer Science. The program also offers a joint program through the physics department in Computational Physics.

OSU offers programs in Computer Science and Engineering through a department in which both disciplines are combined. The school also offers an online undergraduate computer science program designed for professionals that have already earned a bachelor’s degree. 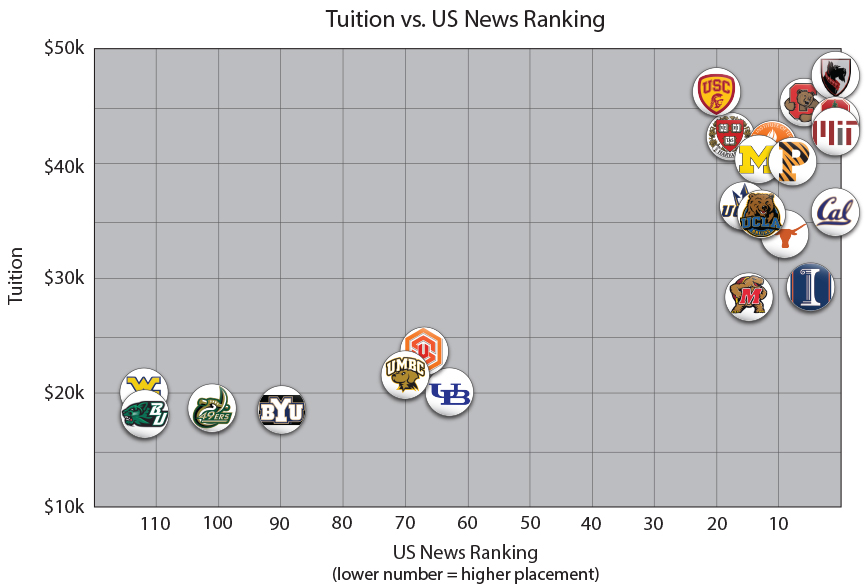 UMBC is prolific in its issuance of computer science and IT degrees, and is one of the top schools in the number of these degrees and certificates conferred. The school offers undergraduates many research opportunities in areas that include: human and computer interaction, intelligent computerized tutoring systems, and exploring predictive model uncertainty.

The University of Utah is the premier research institution in the state. The school offers a traditional undergraduate program in computer science, and also a B.S./M.S. accelerated program. The focus of the program is on providing students with the right mix of theory and practice that will enable them to achieve their career goals in the short term, and remain adaptable enough to succeed in the rapidly advancing field in the long term.

#7. University of Minnesota–Twin Cities: B.A. or B.S. in Computer Science 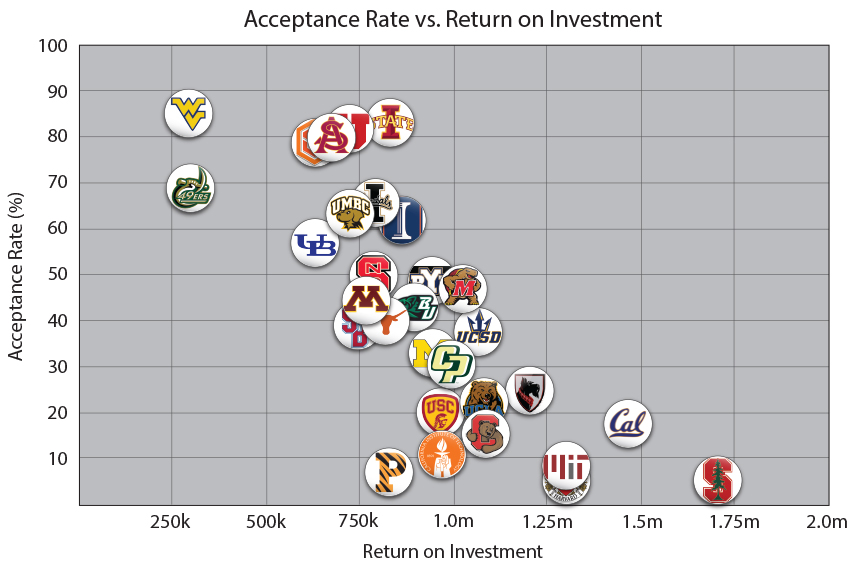 This program was designed to afford students the knowledge necessary for success in their professional career, or graduate study. The school has been recognized for its excellence by the Computer Accrediting Commission of ABET and has been named a Center for Academic Excellence in Information Assurance by the NSA.

The University of Idaho has recently established the Center for Secure and Dependable Systems, a research hub for computer scientists to experiment in the realm of information assurance. The computer science faculty also spearheaded a university wide interdisciplinary research effort called the Initiative for Bioinformatics and Evolutionary Studies.

Non-majors (prospective students and advanced high school students) that are interested in Computer Science as a possible profession can take online courses. While these courses don’t count toward the degree, will help to prepare the student for the program, and give them an idea of what to expect.

This program is accredited by the Computing Accreditation Commission of ABET. The program focuses on providing the students the fundamental skills necessary for success in computer science, including those necessary to work effectively in development teams.

The computer science program at BYU trains students to be successful leaders in the computer science field. Boasting an ROI that rivals and/or tops most of the top Computer Science schools in the country, BYU is very accessible, with a strong graduation rate and one of the lowest tuitions on this list.

Cal Poly shines in most comparisons to the 15 best schools in the U.S. for Computer Science. Great acceptance and graduation rates, very high ROI, affordable tuition even for out of state students, and a great reputation in the field are all hallmarks of the fantastic B.S. in Computer Science program at Cal Poly.

Flexibility is one of the chief for students at the University of Texas at Austin. The school offers B.S., B.A. and B.S.A programs in computer science. This ensures that regardless of a student’s goals in studying the subject, they will be able to study what they want, how they want, setting them up to meet their individual career goals. Students can also enroll in a 5-year B.S./M.S. in Computer Science program.

The University of Illinois at Urbana Champaign is another of the top universities offering students great flexibility in their choice of programs. The new CS+X program is a new partnership between the College of Engineering and the College of Liberal Arts that allows students to combine their computer science education with another area of study of their choice.

UM–Ann Arbor offers students both a traditional program from the School of Electrical Engineering and Computer Science, and a B.S. program through the School of Literature, Science, and the Arts. The LSA program is very flexible, and allows the student to choose from among several tracks early on including: Artificial Intelligence, Bioinformatics, Economics and Computation, Security, Software Development and many more.

Caltech offers students the chance to study either a traditional computer science program, or one that is more heavily focused on computational mathematics. There is also a broad selection of research projects that students can be a part of even at the undergraduate level.

The combined B.S./M.S. five year program will be attractive to students that wish to earn both their undergraduate and graduate degrees at this prestigious computer science school. UMCP is one of the most accessible and affordable schools among the top ranked computer science programs in the world.

Computers have changed the world in drastic ways over the last forty years. Computer scientists are the driving force behind radical innovation in computing. UCSD seeks to train up the next generation of computer scientists to not only innovate, not only develop, but to focus their talents on using technology to solve the major problems facing the world today.

At Harvard the view of computer science is that it is inextricably linked to other disciplines, so at the undergraduate level, students must take computer science as a concentration that informs another area of study. This helps students understand the role the discipline plays in modern times, and allows them to broaden their horizons beyond just the basic mechanics of the field.

MIT is another of the top flight schools that takes an interdisciplinary approach to computer science at the undergraduate level. Students must pick a course that pairs computer science with another discipline: Molecular Biology, Engineering, or Electrical Engineering. This pays off as the average graduate from these programs earns an average starting salary of $90,000 per year.

#2. University of California Berkeley: B.A. or B.S. in Computer Science

Stanford is a school where graduates seem to start their own businesses as often or more often than they go to work for somebody else. The combined net worth of all companies started by Stanford graduates would be equal to the seventh largest economy in the world. This is a school of innovators, and forward thinkers and the computer science program embodies those values.

The National Center for Education Statistics College Navigator was used for information on acceptance rate, graduation rate, and tuition rates. The tuition posted is tuition only and does not include the cost of room and board, or fees associated with the program.

The Academic Ranking of World Universities (abbr. ARWU) was one of the ranking authorities consulted to determine the quality of programs included in these lists.

U.S. News and World Report was one of the ranking authorities consulted to determine the quality of programs included in these lists.

The methodologies used by ARWU, U.S. News, and Payscale are available from the linked websites.